Due to COVID-19 the Campus Recreation facilities and programs will remain closed indefinitely.  For the most current information regarding Campus Recreation check back to this page or our social media platforms.

The City 6 Extramural Classic was founded in 1986 by representatives from Temple University and Saint Joseph's University as a way to encourage recreational sports and social interaction among the city universities.  The first championship tournament was held that fall at the University of Penn’s Franklin Field.

The idea for City 6 arose at a post-dinner discussion between former Campus Recreation director at Temple University (Steve Young) and then Director of Recreation at St. Joseph's University (Mike Diorka) while attending a NIRSA conference in Las Vegas, NV in 1985.  Steve started jotting notes down on a napkin, shown below, with ideas for what sports City 6 should host, which schools should be involved, possible logo ideas, basic philosophy, etc.: 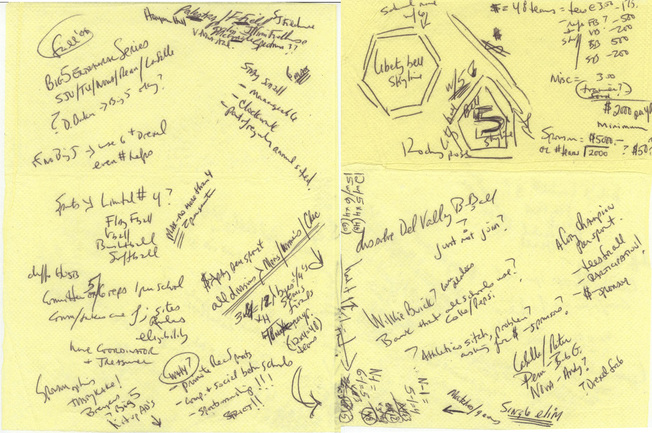 Over 30 years later, through multiple sponsors, cooordinators, champions and participants, the Philadelphia City 6 Extramural Classic lives on and is an integral part of the Intramural programs for each of the six schools.